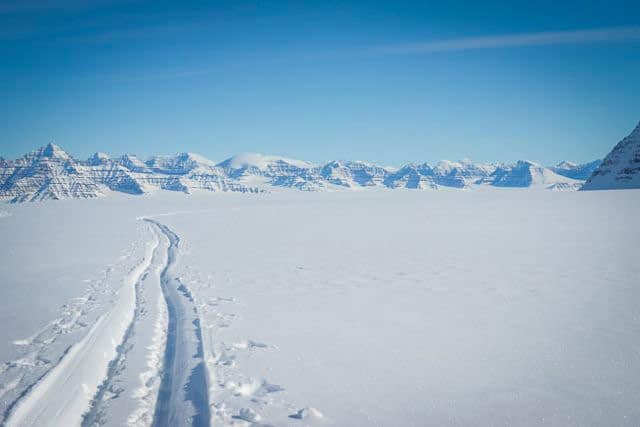 “We watched all three of The Thing movies in order.  It’s a tradition. When the last plane leaves for the winter, everyone gets together in the recreation room and watches them on the big screen. There’s a superstition that if we don’t stick to the tradition it will be a bad winter.”

Caroline gave a half-laugh and stared at the grainy image of her daughter on the screen. Her cheeks ached from smiling.

Caroline nodded too to give herself time to think. Dank was one of those tricky words that she never knew how to respond to. It wasn’t like sick or ill or wicked or flourishing. Those were easy and meant only good things. Dank was more nuanced than that. She decided that in this case it probably meant, “that’s weird, but kind of cool.”

“And how have you been, sweetheart?” she asked.

The eye-roll told her she’d made a mistake. Too soon. Too soon.

“I’m fine, Mom. You already asked me how I was and I said fine.”

A sigh expressed Sharma’s exasperation at having been saddled with a senile parent.

Caroline gathered up the reins of conversation. This was just another way in which a Skype conversation was unlike a real conversation. Usually when Caroline and Sharma were fed up with each other, they could sit in silence for an hour or more before one of them forgot to be angry and started speaking again. On Skype, you felt obliged to keep the conversation ticking over, especially when your words were being broadcast across 18,000 kilometres via three separate geostationary satellites, and the bill was being picked up by Spire.

The South Pole International Research Establishment was not in the business of sponsoring strategic silences between mothers and daughters. Caroline had booked a 15-minute call and she intended to use every second of it.

“My bedroom is about the size of your bathroom at home,” she told Sharma. “I’ve got a narrow little bunk that’s bolted to the wall and a tiny work station with a desk and chair. I’ll e-mail you photographs. The thermostat is permanently set at 18.5 degrees, which admittedly is about 68 degrees warmer than the outside air, but still a bit chilly.”

“You signed up for this, remember? Nobody made you. There’s no point in moaning about it.”

“I wasn’t …”  No, she would not respond to provocation. “The other thing I wanted to tell you was that we’re only allowed two showers a week, for two minutes, maximum.”

Sharma’s face screwed up in delighted disgust. “That is so gross! That’s, like, super gross. What happens if you go one second over two minutes? Do they fine you or something? Is there someone standing by with a stop-watch to make sure you don’t go over?”

Caroline grinned back. A real grin. The kind that didn’t hurt your cheeks. “Worse. The water shuts off automatically after two minutes.”

“So if you were in the middle of washing your hair and the water shut off, you’d just have to live with soap in your hair for the next three days?”

“I would die. I would actually die.”

“You totally would.  You would not survive this.  I’m barely surviving it myself. How’s Thato, by the way?” Caroline snuck it in under the wire before Sharma could close up.

Her daughter frowned and sighed. “She’s okay, I guess.”

“She says I have light-skin privilege.” Sharma blurted.

Her words hung in the grainy silence between them. There it was, Caroline thought. This was what had put the tiny frown between Sharma’s brows and the clench in her jaw. This was the cause of the tension Caroline could feel crackling across 18,000 kilometres.

Sharma’s body jerked in that familiar way.  It was usually a prelude to a tantrum.

It was an ongoing argument, and one Sharma was finding difficult to process as her emerging political awareness grew.

“You’re not the same, sweetheart. Colourism is a thing – you know it is. You’re a person of colour, but you’re also mixed race and you have very light skin. You have benefited from that privilege your whole life. The right thing to do is to acknowledge it, not fight with your best friend about it.”

“Oh, my goodness! There is literally no point in talking to you. I don’t know why I even bother!” Sharma flounced out of camera range.

Caroline found herself staring at the sofa in her parents’ sitting room. Moments later, her mother came into view.

“Sorry, that sounded like it didn’t go too well.”

Caroline shrugged. “At least I got the problem out of her. I hate not knowing what’s bothering her.”

“How are you doing, really?” her mother asked.

“Surprisingly well, actually. I thought I’d feel panicky or claustrophobic after the last plane left, but I’ve been fine. I think it’s because the base is so big, with so many different levels. And when you look out a window you see all this wide-open space around you. It’s getting pretty gloomy out there now – a kind of permanent twilight. But you can still see quite far. There’s the old geodesic dome, and the remains of the summer camp. You can almost fool yourself that we’ve got neighbours. We don’t of course – those buildings are empty, but it feels companionable.”

“They’re an interesting bunch. You have to be pretty tough-minded to be wintering over at the South Pole. We don’t have many whiners here.”

“Well, I do hope you’re making friends”, said her mother, for all the world as if Caroline were the new girl at school.

“The only irritating thing is that one of my experiments will have to be delayed because a couple of the staff have caught colds.”

“Are you talking about your work on how viruses survive in cold environments?”

“No. This is about the incubation period of viruses in isolated communities.”

“Well, can’t these colds of theirs become part of that study?”

“Unfortunately not. I need to wait until they’re all better. It’s been a week since the last plane left, so these are viruses that were introduced before we became isolated. I need everyone to be completely well before I can start monitoring them.”

“And that nasty little box of bugs you brought with you?” her mother asked.

“Was brought here under heavy security and is currently in a super-secure vault. Don’t worry, Mom. I …”

Caroline turned as someone came into the room. She looked at her watch. Her time slot was almost up.

But this wasn’t a would-be Skyper. It was Kelebile Khumalo: senior nurse, trained paramedic, ICU sister, and Caroline’s only fellow South African at the base. He gestured to her to wrap up her conversation. It was hard to tell with someone so unflappable, but Caroline got the impression it was urgent.

“I have to run, Mom. Duty calls. I’ll speak to you again in a few days. Sharif should have picked Sharma up from you by then. Thanks so much for looking after her while he’s away. Bye, now.”

She gabbled the last bit and disconnected the call.

As they approached the sick-bay the steady beeping of the monitors turned into a long, single whine. They broke into a run. Kelebile’s long legs got him to the patient first.

Click here to buy the whole book now on Kindle. SPIRE is published by Clockwork Books. The trade paperback will be available in May 2017.